Friday Favourites: How I Learned to Stop Worrying About Getting Addicted and Just Enjoy Pinterest

When you first heard about Pinterest, did you immediately think 'That sounds like something I should definitely avoid or it will take over my life?'

Are you still relying on old-fashioned bookmarks to keep lists of sites you might maybe, someday revisit, if, in the meantime, you don't forget what they are and why you wanted to look at them?

This was me. For far too long. Then eventually I gave in, and you know what? I haven't regretted it. I love Pinterest, and it doesn't take up masses of my time. Here's why:

1. There are only so many pins

When I first joined Pinterest, I was really wary. I set up my first board, DIY Fashion, thinking that would be the only board I would ever allow myself to make. I already had loads of stuff ready that I wanted to pin - the reason I was resorting to Pinterest was because my browser bookmarks just weren't working. I wanted to be able to scroll through and find the tutorial I was looking for by looking at images. Far faster and easier than reading titles.

I pinned everything I started with, and then spent about an hour a day for the next week adding more pins as suggested by the app. But then, something unexpected (but with hindsight, totally predictable) happened.

I ran out of stuff to pin.

There are only so many pins! And this is true of every subject! I now have boards about hair and vintage dresses and embroidery and organisation amongst others (for the full list, see my page here). My feed is now mostly repeats of things I've already pinned, so the upkeep, checking my feed for new pins and pinning them to the relevant boards, only takes about ten minutes every couple of days.

2. Most of the notifications can be ignored

Sometimes I get over 100 notifications a day from the Pinterest app, but I ignore them. Why?
They're mostly just other people liking and repinning my pins. I don't even have the app set to push notify me of these, so I only see them when I look at the app itself. Then all I need to do is tap the 'You' tab and they're all cleared.

The Pinterest app sends me push notifications with suggestions of new boards to follow or top pins that match my keywords, so if something's popular and I haven't checked Pinterest for a while, I'll still find out about it eventually. It's like having a virtual assistant for my hobbies. 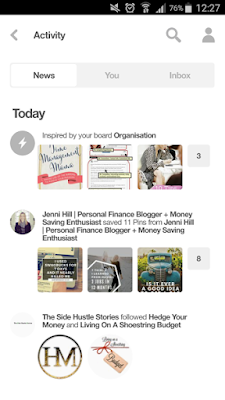 4. I've gotten followers without even trying

I don't have hundreds and hundreds, but just by keeping my boards updated and pinning great content I've acquired a small following - hence all those notifications!

5. It's a really lovely way to store lists

Ultimately, Pinterest is a visually-appealing, user-friendly, interface for storing lists of links. It's much easier to use for anything visual, like DIY tutorials, recipes, hairstyles, make-up, etc, than traditional bookmarks.

With that in mind...

I would love it if there was a way to import some of my old bookmarks. I have masses of old make-up tutorials and inspiration photo posts bookmarked but pinning them one by one would be extremely time-consuming. If there was a mass-uploader that would let me import them and then just pick an image for each one that would be perfect!

Do you use Pinterest? Do you have any tips, or favourite boards? Let me know! You can follow my boards here.