Hats and I: A Partial History

Hats. What would I do without them? Who was I before I discovered the wonder of hats?

A much less flamboyant version of myself, that's for sure. I discovered the wonder of hats around the same time that I decided to give up blending in and release what Sadye in Dramarama calls her 'Lurking Bigness' (I am reading that book at the moment. It is amazeballs). Once upon a time, I would have lusted over the hat from afar. I might have, in a moment of daring silliness, tried on some of the department store formal section offerings. Occasionally, I might have bought one - only to keep it in my cupboard, only wearing woolly hats on the coldest winter days or during the most scalp-burning summer hours and feeling self-conscious all the while. 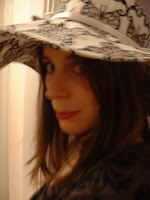 Par exemple, the one to the right. I took this photo in first or second year of uni (hence the blur), I forget which. I love this hat, but I bought it in Debenhams yonks ago and have hardly worn it. For the first several years, I was too scared to wear it outside the house. Now I have no such fear, but the problem is the print. It doesn't go with anything! It's acceptable with a plainish dress, but most of my summer dresses aren't plain. Also, I can't find it right now...

I have a couple of regular summer hats that fold up easily and are plain (boring) enough to go with anything. Here's one, a hand-me-up from my sister. Yes, that's the Colosseum in the background. 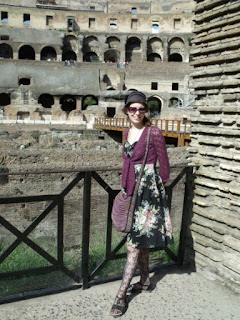 In my last post, I showed you one of my winter hats and the vintage black and grey hat, the latter of which hasn't been worn out of the house due to lack of occasion. I know! I should make an occasion! Here is another hat that has yet to make its debut into society, apologies for another old blurry bathroom pic: 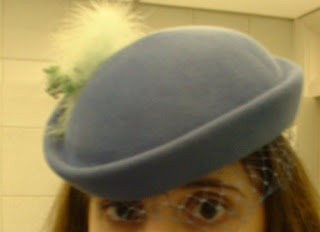 I just don't wear blue that much. I have worn it a lot more recently though, so perhaps this hat will have its time soon! I bought it from Prangsta (warning: website will make you drool) - they have, or had, five years ago, a vintage section in the basement. It was £10. It still has the little pink label attached. I think this is the hat that really triggered the obsession. I just couldn't believe that I had bought something as silly and frivolous as a hat! I loved it. And proceeded to purchase several more hats of varying practicality and wearability.

I've gone through phases of obsessive wear with most of my hats - I've got a green silk floppy one that I wore practically every day for a fairly long time, and a pale blue and a black one, both similar to the red one in the previous post, that have had a lot of wear. The dark red spiral mesh cap has been worn quite a lot as well, and I haven't even started telling you about my beret collection - I have four. But it is far too hot to be wearing and photographing berets, so I will leave you with this picture I took of Aprella at an Emilie Autumn concert, wearing a miniature top hat. I have wanted a miniature top hat since the moment I first saw one. One day I will find the perfect one, and actually persuade myself to hand over the funds for it. Shouldn't be too hard. 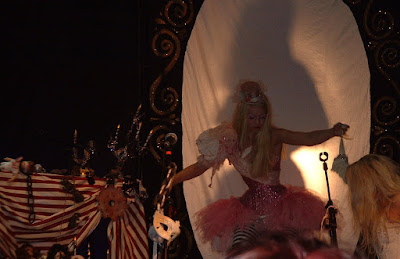