What I Wore: Mad Hatter's Day/Red and Black Week

Happy Mad Hatter's Day! Despite having a photography student for a sister and studying many an article on the subject, I still suck at taking outfit photos. Proof below, but first! 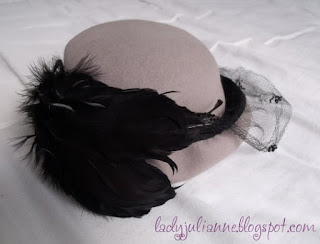 This is my favourite hat. I think it's from the 1950s. I have never worn it out. Every time I think about wearing it out, I never end up going to the event I was planning an outfit for. I really struggled to get a picture of it in action - in the end I had to pretend that I was on Myspace circa 2004 and the hat was my face. 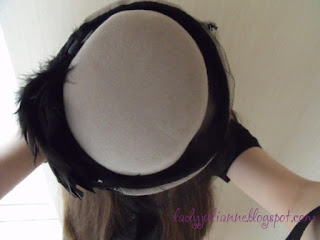 It's in an erm, interesting state of repair. I bought it for £10 in a local vintage/secondhand shop that has since closed down. The feathers are awesome but not in the best condition, some of the rachis have been snapped. There doesn't seem to be any lace missing, but it's been torn a bit. When I first got it, it smelled of gravy granules. I am not even kidding. This is not the only vintage hat I've had that smelled like that either, it seems to be a thing, stench de gravy granules and vintage hats. But I put my limited edition precious Jungle soap from Lush inside them for a couple of weeks, and now they smell fine.

Grown-up goth blog Sophistique Noir has been hosting a red and black theme week, and I would have, ideally, contributed more than one post, but unfortunately I don't have many red clothes. Don't worry, I have already looked at my life AND my choices, and decided to keep both eyes out for more red clothes in future. Seriously, what was I doing? Now if it were purple and black week...or purple and black month...However, I do have red eyeshadow, of course, and my tights box contains three different pairs of Marks and Spencer red tights. I love M&S tights. Every pair comes in at least two different sizes, depending on the style, there many be four - small, medium, large and extra large. Why don't other shops sell tights in varied sizes? 'One size' is the bane of my life. People are not 'one size'! 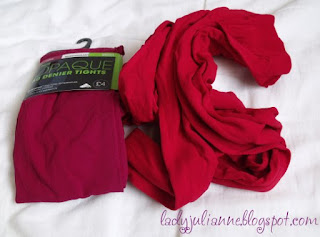 On the right are the crazy bright ones, which are the oldest and were purchased when opaque coloured tights had just become fashionable. I used to wear them a fair amount to the students' union for club nights with otherwise all-black outfits, and of course on Christmas Day, with some green! Still in their packaging are a pair I got last Christmas. They have not emerged from the packet because I have too many pairs of tights 'on the go' already. It's a sickness. A really pleasant sickness. The pair I am wearing in this APPALLING outfit photo (I need to learn to use a tripod, stat) are the second pair I got. They're darker, therefore more subdued. I usually wear them with purple and black. 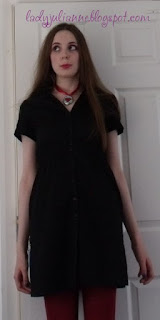 This is not a particularly interesting outfit to say the least. But there is red. The camera was balanced on a pile of clothes. My facial expression shows that I knew how this would turn out.

I call this dress my 'goth nurse' dress as it is probably the closest I will ever get to wearing an actual goth nurse dress (if you like them, more power to you, but really not my thing). It doesn't fit. It's perfectly comfortable, but was probably designed for a much shorter woman as the waist section is right under my boobs. Don't care though, as it's got pockets at the hips! Gotta love a dress with pockets. Clue #1 that I would never wear this outfit out of the house unless I joined a band or something similar: 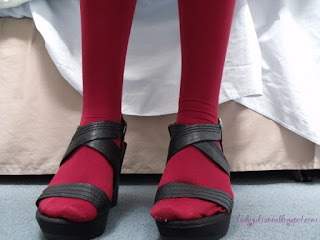 These shoes. Nine West size eights (US 10) bought during a sale at Debenhams a couple of years ago. As I've mentioned before, Nine West's eights come up big, so I can sometimes squeeze my feet into them. These are a little small but as they're strappy it doesn't matter. I have actually only worn these shoes outdoors once - for one of my sister's birthday parties. They're quite comfortable, but most of my friends are significantly shorter than me, whereas my sister is half an inch taller than me. If I wore these clubbing with my friends I couldn't hear the conversation! Also, I never go anywhere where it would be a good idea to wear these shoes with this dress. The dress is too casual for clubs where I might wear the shoes and the shoes are totally inappropriate for mooching around shops and pubs. To do: join a band.

Clue #2: I'm only wearing one necklace and no other jewellery, and Clue #3, it's the Vecona Sacred Heart locket, which only leaves the house for Emilie Autumn gigs. I'm afraid of the ribbon magically fraying really quickly or something equally unlikely. If I were going out in this outfit, I would carry this bag, which, of course, came from a charity shop. I do love it, and hope to get a lot more use out of it this summer. 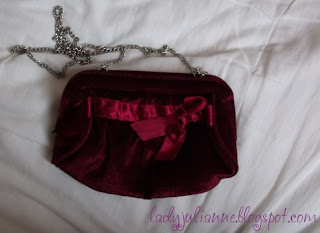 Now on to the make-up! At least I've worked out how to take decent pictures of my make-up. 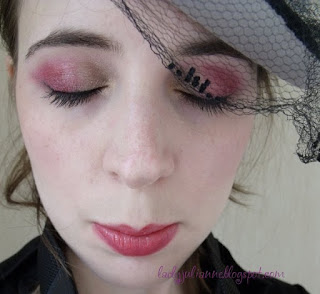 
Lips:
Mix of It Started With A Kiss lip tint from Lush, Rimmel Diva Red lipstick, and Lush's Let Them Eat Cake (2009 edition) lip balm. I didn't want to go too bright, mostly because I was about to eat some cheese and I didn't want to be eating a load of lipstick too, but also partly because I wanted to match the level of red on my eyes.

PS. I remembered that I have a red hat too (also secondhand, retro M&S). MYSPACE TIME! 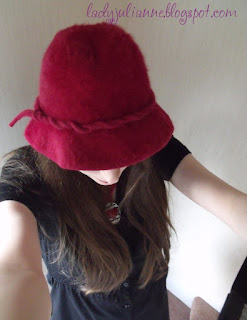 This one is also in a bit of an interesting condition: it's angora-fluffy but some of the fluff has worn away in patches. I think it gets away with it though because it's so RED. Thoughts?
Written by Julianne at 23:29