this obsession with bloomers 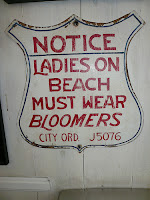 That's right. Grammar takes priority over post naming convention, and I have finally decided to write about bloomers.

I have the quirk of being more attracted to historial undergarments than overgarments. All those long, heavy dresses? Forget it. But petticoats, bloomers and corsets? Yay! They make modern clothing so much more exciting, and now we're not ashamed of our ankles and men have learned not to faint away at the sight of them, we can wear them as clothing in their own right, rather than as foundation garments.

I have petticoats, and I can't afford a corset - well, technically I have a plastic boned one from Marks and Spencer, but it doesn't do anything because it's my size rather than the one below. Bloomers are my next project. I don't want to buy a pair, because they are extremely difficult to find in shops of the bricks and mortar variety, and they seem pretty simple to make.

So, I have a dilemma.

Do I knit my bloomers, or sew them?

Knitted bloomers would be based on the Unmentionables pattern from Knitty Summer 2007. I would have to both shorten and tighten the pattern, but I find knitting more enjoyable than sewing. I think this has something to do with yarn.

Sewing would be faster, and allow me to use patterned fabric. Trying to knit a coloured pattern into my bloomers would probably drive me insane. Also, there are both tutorials for making bloomers from scratch - such as this one from Lara the Lacemaker and this pattern from Gifted Writer - and for recyling already existing clothing. There is a lot of bloomer-related discussion on the official Emilie Autumn fan forum (Autumn is a fan of bloomers herself), and this has yielded some useful advice. Miss Nemo made bloomers from a pair of old trousers (scroll down for tutorial), and The Lady of The Manners of Gothic Charm School has contributed her advice for doing the same (last post on page).

Whichever method of construction I choose, I have further decisions to make. What colour should they be? And how much lace should I use? I think I need to spend some time doing some research before I commit to making my first pair. Bloomers are not the easiest of garments to find online, but I have discovered some lovely pairs.

There are some cute bloomers in these Gothic & Lolita Bible scans: black and frilly, and um...black and frilly. In The Starlight have two varieties of bloomer availiable, in white, black, pink, blue, red and lilac, although they can also do custom work with your own fabric. There are several different and beautiful designs available in Vecona's store. I especially like the long brown striped pair. For shorter pairs I like reconstructionist's work, and to branch away from the dark side, Urban Prairie Girl has lovely bloomers in a bright green star pattern.

I am now wanting to design and create a pair in hot pink with black lace, strands of fake pearls and maybe a black cat applique! If you're looking to have some custom bloomers but lack the leet sewing skillz, Reveriebydesign on eBay makes custom pairs of bloomers for varying prices, and ifautumnends on Etsy does as well, for US $20.00. I am almost tempted by the latter - custom bloomers for about £10!
Written by Julianne at 04:41