The Dark Side of Street Fashion 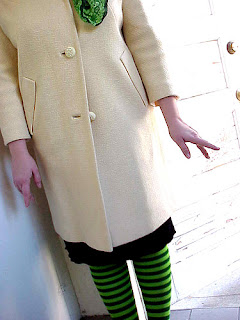 Unfortunately, Shoutfit has been missing for a couple of months. No one seems to know why, but it is a great shame. I had only just discovered it before it went down and as I wrote in friends, trends, and (thank the gods) some goths!, it looked like it would be heaps of fun and really inspiring for those of us who dress on the dark side. Fortunately, I am going to share with you the delights that I have found whilst trawling around other, less alternatively-inclined online street fashion communities in search of...

The Dark Side of Street Fashion!

This time I would like you to imagine a scene including pouring rain and the exterior of a almost-ruined castle. The giant oak door swings open and you see Dracula, except the vampire has abandoned his clichéd capes and red velvet shirts and is now looking totally stylin' because he's spent all his time recently reading wardrobe_remix and StyleMob. In fact, it's a good thing that Shoutfit went MIA, because now he has some time left to go get himself something to drink. He was getting to be a bit too skinny, and would have been on a slippery slope to being really dead as opposed to undead.

I don't have a picture relevant to that scene to supplement your imagination so I will instead suggest you admire the one above. It is by jek in the box, and I think it is amazing. I previously associated bright green and black striped tights with really badly dressed Mansonites but now I am seeing them differently. The cream coat and the green flower provide balance and elegance and I am now inspired to try wearing the similar purple and black striped tights that I have in my drawer. They were given to me by my sister who used to wear them when she was thirteen-fourteen years old (now being sixteen and "scene") and they languished in the drawer until I volunteered to take them off her hands. I didn't know what to do with them, but now I do: I will devise the most classy, elegant outfit ever, and then incorporate the tights! If I can make it look half as awesome as this, I will be extremely excited.

Also stunningly sophisticated is piksi_, a woman who I am quickly developing a style crush on. She was one of Painfully Hip's Thrift Stars of the Week, and has been featured in other blogs as well. Check out 'When it still was warm' and 'October 2nd' - I want that high waisted skirt so much I'm sure I think about it several times a week - and feel the jealousy. She even does purple and black, putting me to shame with her ridiculous amount of stylishness. 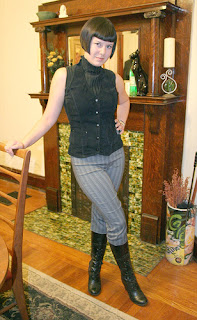 I am also jealous of ms. stephanie brown for looking like sex, mod_complex for the striped trousers, boots and waistcoat combination pictured on the right, cryptdang for owning this dress as well as for going to many burlesque shows (check out her photos, seriously), and Jaana-Mari for owning these boots and wearing them so well - I have wanted those in that colour since a link to the manufacturer's was posted on the Emilie Autumn fan forum ages ago. It still pains me that they seem to be no longer available to buy.

Over on StyleMob, where they have yet to come up with a widget that lets you actually show the images for looks (apparently it is in the works, though) on your blog, I managed to fight through the Indie Army images and discover such hidden gems of darkness as electric thomas' victorian mad scientist look. I think it is fantastic. The ruffles on the blouse, the brooches, the hair...She says that "I never not want to wear this", and I think if I was capable of creating such an extraordinarily awesome effect with clothing and hair I would probably work that look pretty much everyday.

Hannah Karina's cat has a gorgeous tail and the girl herself looks seriously cute. I have recently started to wear a pair of diamond-patterned tights (dark purple) with dresses (usually purple, although I did wear them with black and beige once) myself and it's good to see someone else rocking the look.

Usually gothic lolita style doesn't make much of an impact on me. I was a big fan for a short period of time but I quickly got bored observing it. There are a lot of rules to the subculture and in a lot of online communities any attempt at experimenting with the look is squashed. But Youran is wearing the most fantastic pink tartan skirt ever. Ever. See, this is how you do it, Avril Lavigne. It even has a crown on it!

Finally, the prize for Most Best Look on StyleMob has to go to toire. Even the cat seems to be part of the overall look. I wish I could get a closer look at those sleeves, and the brooch, and the vest. The shorts are also in this picture - where you can see that in fact they are striped bloomers! Perfect.

Now I could go on for longer, but there is a limit to how much envy one woman can stand to build up in an evening's blogging, and I think one more photo of something gorgeous might send me over the edge! That shouldn't stop you, however, from sharing any examples of street fashion from the dark side in the comment box.

All photos used have this Creative Commons license, and make sure you check out the galleries of the people whose images I have shared for more delights.
Written by Julianne at 20:46